In previous posts I stressed the need for high-speed recording media when recording ATSC IQ samples. A few days ago I proved myself wrong.

I was using an older copy of SDRSharp, one that still works with the SDRPlay. SDRSharp has superior DC cancellation functionality, which it labels "IQ Correction."

I used the Baseband recording option at 16-bit sampling and managed to record 44 seconds to a fast magnetic hard drive before dropping samples. The IQ file yielded a perfect decode. You can download the final TS here: 183mhz_decoded.ts.7z. (70 MiB)

You'll probably still need a RAM drive for longer recordings, but this opens up a lot of possibilities. Someone just needs to write a program that will "buffer" writes to a hard drive to smooth out latency. Ideally this would work by registering a virtual drive and creating a RAM buffer, and having two separate threads, one to accept the write requests and store them in RAM, and another to write them when the drive is ready. That way, SDR programs never see the delay in the hard drives.

(Update) I've found a paid program that should do this. It's called PrimoCache and the concept is called deferred write. It costs $29.95 USD and comes with lifetime free upgrades.

I learned that if you open a valid decoded TS file in MediaInfo you can retrieve the EPG, among other things, such as channel resolution and bitrate. 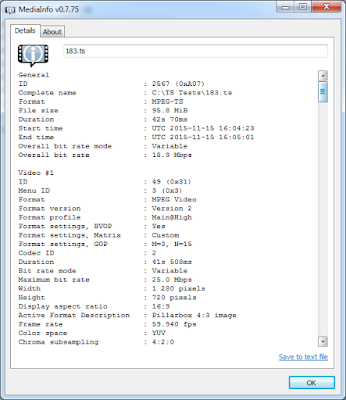 Click here to read a TXT file of MediaInfo's output for the TS file I offer above. The EPG's for each channel are at the bottom.

(Update 11/24/2015) Interestingly, there is a Start and End UTC near the top. MediaInfo can apparently look at the timestamps embedded in TV channels to find the start and end time of the recording. Note that the recording's Start and End span 38 seconds, 6 seconds less than the 44 seconds of IQ data I took. This implies that the syncing (and de-syncing) periods take off 3 seconds at both the beginning and end.

During the experiment under "First," I also tried taking 8-bit IQ samples, which cut bandwidth and storage requirements in half from 32 to 16 MiB/sec. I was not able to decode this IQ file, but maybe someone else will figure out a way.

Of course, one big advantage of the SDRPlay over the RTL dongle is the 12-bit sampling. and the loss of dynamic range incurred by downsampling to 8 bits might hamper decoding no matter what you do.

As always, feel free to comment below.
Posted by Designing on a juicy cup at 4:45 PM