I've been wanting to capture weather satellite signals for quite a while. This was one of my considerations when I chose the SDRPlay, since the high-quality digital mode is 4 MHz wide. Tonight I was able to capture the low-quality analog signal.

For this and most of my other experiments, I used TV rabbit ears. They're from Target and cost about $20. This is my go-to antenna, offering great performance on VHF and up. With it, I've been able to receive broadcast FM, 1900 MHz GSM, and everything in between. Just don't expect it to do HF very well.

I'm particularly interested in the digital HRPT signals, but since I'm not fully set up for that yet, I had to settle for the analog one. That's OK, because I didn't even see anything on the HRPT frequencies when NOAA-19 passed by this afternoon.

Unlike what I first expected, it's not hard to capture weather satellites, even though some online tutorials might look hard. My favorite radio projects are those that accept an audio signal through Stereo Mix and decode it live. I don't like having to record, transcode, feed IQ into complex software, etc. I will if necessary, like I did with GNURadio and ATSC, but I really prefer live audio-based decoders.

I did manage to capture a weak signal of NOAA-19's analog broadcast. It was too weak, so I didn't get a good decode. Later, NOAA-18 made a pass and I managed to tune it in. The funny thing was, Stellarium reported it as transmitting on 137.1 MHz. I didn't see anything when I tuned there, so I checked Wikipedia and it said that NOAA-18 is actually on 137.9125 MHz, having moved to that frequency in 2009. It's a good thing I didn't just wait for a signal, because I would've missed a great pass.

I tried to look up what LRPT looks like on sigidwiki.com, but there was nothing. Turns out the signal is actually called APT. LRPT is a Russian digital (but low-res) format. I've included pictures of APT below.

Really bad when it passed over my house:

I also would've appreciated a sound sample so I could positively identify it, so I've included one. It's recorded in NFM.

I managed to find a program called WXtoImg that can decode by sound instead of pre-recorded files. It's free but you can pay for more features if you want.

Next you need a program to tell you where and when the satellites will pass. I use Stellarium. Since I have an older video card, I have to use the 0.12.x series. Enable the satellites plugin and make sure it updates the orbital elements (it should do so automatically.)

Now zoom out and scroll in such a way that the ground wraps around so that the sky is a circle in the middle. This lets you see the whole sky at once. Go into Stellarium's Date and Time dialog, click in the minute, and push the Up arrow key. Stop when a weather satellite shows up (Hint: NOAA-17 is dead.) Try to find a good, high pass. I ignore any passes that just skim the horizon. You might want to look up which other NOAA satellites are dead. NOAA-15, -18, and -19 are functional at the time of this writing. Make a note of the time and direction the satellites rises. Try to find a window that faces that direction or go outdoors when it's time.

When the time comes, turn on HDSDR, set the mode to FM, bandwidth to about 30 KHz, tune to the proper frequency, and notice how it is a few kilohertz off. This is due to Doppler shift. Zoom in and tune to the actual center frequency. Since this is FM, being off-center will hamper the signal. Be sure that Stereo Mix is your default recording source and that the volume is about right.

You can also record 48 KHz IF and demodulate it later if you prefer. It's quite easy in HDSDR, just right-click the Record button and check the IF checkbox. This would let you go back and try different settings without missing the pass.

Be sure to turn on AFC in HDSDR. This tells HDSDR to automatically stay centered on the signal as the frequency shifts.

Open WXtoImg. Click File->Record. Under Record and auto process, click Create image(s). Then click Manual Test. It should now start scanning upwards. You should see test patterns on the side and be able to recognize clouds. If you're indoors, the signal will go away abruptly as the satellite passes directly over your house and sets, even if the antenna is in a window. It might work better if the antenna is outside with a clear view of the sky.

Here is the final, but unprocessed, picture:
(click to enlarge) 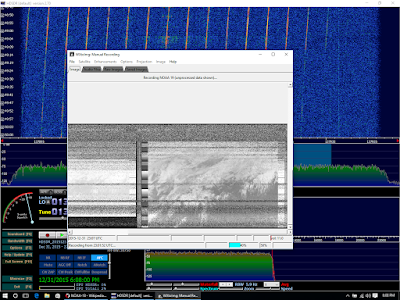 Notice how the lines in the waterfall above are slanted? As the satellite rises and sets, the Doppler shift constantly changes the signal's perceived frequency. This is why you need to enable AFC.

Posted by Designing on a juicy cup at 8:24 PM