I had already tried this with success on January 1, but I figured AT&T might wait until midnight. 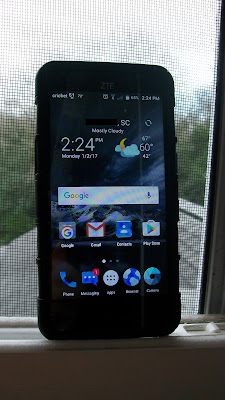 In my area AT&T prioritizes WCDMA and LTE, so I usually have to be 3 stories up and lean the phone on a window to get EDGE. 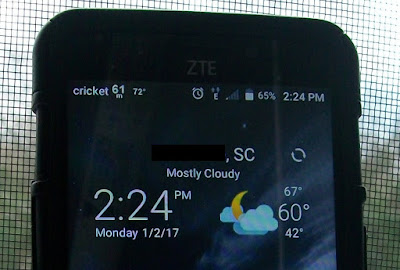 I have no idea why AT&T is delaying to shut down their 2G network, although I can't say I'm disappointed. In my opinion, GSM can and should be kept running in the WCDMA/LTE guard bands as others have suggested because not only is AT&T's LTE unavailable in large areas I've visited, it's also great to be able to keep using old phones and cheap plans.

As it turns out, AT&T isn't the only company to forget to turn off a network. I heard from Trango on StarChat that Inmarsat has yet to disable their B phone service as planned for the end of 2016. He told us that people were checking their service by making brief phone calls and just saying "Check". Let's hope Verizon forgets to turn off CDMA 1x in 2019...

On a side note, I saw what looks like GSM within an LTE signal.

The SDRplay isn't wide enough to show an entire LTE signal, but I scrolled and checked it against a 700-MHz LTE signal and the width and unmistakable sharp edges matched perfectly. However, the modulation pattern did not appear to be the same, so perhaps they use something else in the PCS (1900 MHz) band.

While the SDRplay isn't wide enough to show all of an LTE signal, I did scroll the waterfall window to see the edges of the signal. The signal width and sharp edges made it clear that this was LTE, although the modulation pattern is different from what I've seen in the 700 MHz band.

The 2 small signals inside the big one have to be GSM because they make a GSM-like noise and are about 200 kHz wide. 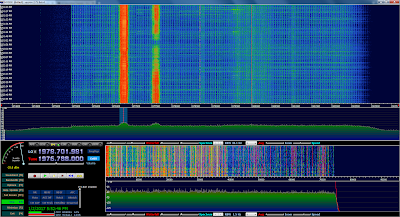 If this is intentional, then it's a clever use of spectrum because GSM, being narrow, can give a better signal per watt while LTE, being wide, can afford to lose a few of its miniature OFDM carriers.

Posted by Designing on a juicy cup at 6:28 PM