This post is about computer cooling, primarily for GPU's and hard drives. Before I begin, I wanted to suggest that you enter to win an EVGA GTX 1080 Ti. The contest closes 12 days from now. Full disclosure: I do benefit if you enter.

My computer setup happens to be in a room that the previous owners neglected to insulate, so we don't usually run AC there. That presented quite a problem last summer when my computer's aging fan, even with the dust blown out, couldn't keep up and the computer would keep shutting down for its own protection. Losing work randomly made me eventually devise a system of a well-insulated box containing the computer, a fan, and frozen water bottles. It worked pretty well and the box was about as cold as AC, but it still didn't put out nearly as much consistent cold air as was necessary. Using this over the summer, I observed several problems:

I also noticed that our old freezer, a Kenmore Frostless from 1990, froze bottles slightly faster than the brand-new Frigidaire we got in 2014. Considering the old freezer draws less electricity, I suspect the R-12 is responsible. Naturally, I shifted the bulk of my ice production to the Kenmore.

This past winter (2016-2017), I decided to build a better system before it became necessary, so I would have time to perfect it. Since the ice does most of the work and the water (even though it's near-freezing) is virtually useless, I would need my new system to discard the water. Since freezers' automatic ice makers are much faster than freezing bottles, they would be the source of ice. This also solves the surface area problem since a pile of ice cubes will have a lot more area than a cluster of bottles.

I put together a crude system consisting of a plastic container with a hole in the bottom. I fill it with ice and mount a desk fan on top. The fan takes up about half of the top's area and forces air through all the cubes and out the top again. This system worked well. It produced consistent and very cold air, almost like a small AC unit. There are now only two problems:
This is a lot better than where I was last summer. Lately it's been cold to mild in South Carolina so I haven't had to put it into "production" use yet. However, the old freezer's ice maker was still too slow. A quick Google search for making ice faster revealed something called "Quick Ice", which is a feature on fancy fridges that uses a fan to blow across the ice maker. At one website they write, "For models with the Quick Ice feature, ice production can be increased by nearly 48% to about 6.2 lbs per day." This did not sound impressive, but I knew it couldn't get worse so I decided to try the idea and see how much I could make. Using my strongest CPU fan and the steel wire used for the Inmarsat antenna, I made a mountable fan setup for the old Kenmore freezer. Of course, I first checked to see exactly where the plastic ceiling rail was, so I wouldn't end up making the wrong mount. Then I mounted it and wired it to a 12-volt external hard drive power supply. I emptied the ice maker's bucket and then ran the ice maker and fan for 24 hours before checking it. When I returned, I was very surprised to have 14.3 LB of ice! That happens to be exactly 3 full ice cream buckets (below). 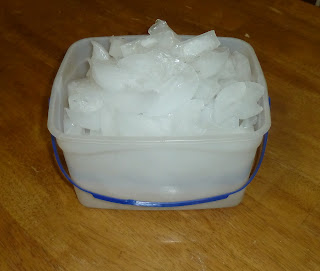 Here's the freezer's ice bucket before being emptied: 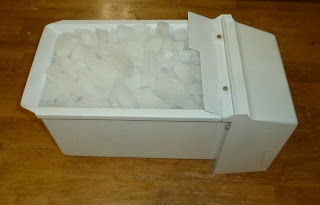 And here are my freezer settings:

At 144 BTU/LB for ice, this comes out to 2059.2 BTU of cooling per day, or 85.8 BTU/hour. Nowhere near an AC unit, but still quite useful for small enclosures. Plus, since I'm not there to get the ice during the night, I can get more BTU's per hour using it only during the hottest parts of the day. If that's 8 hours a day, I would get 257.4 BTU/hour.

This is probably not financially feasible in the long term, but it's still a neat project. I was thinking that if I ever set up my GPU for a remote compute service and was still using ice, my website could have a footer that says, "Our GPU setup is proudly cooled with CFC-12, an energy-efficient refrigerant."
Posted by Designing on a juicy cup at 12:52 PM