Recently I had the chance to test some children's walkie-talkies. These are generic blue walkie-talkies that can accept plastic front plates with Marvel characters. The label did not specify the frequency but a quick Google search for the FCC ID, 08KAK-2, revealed that they operate in the 49 MHz band. However, that's not where they actually operate...

I played a song on YouTube while holding down the talk button and this is what I got: 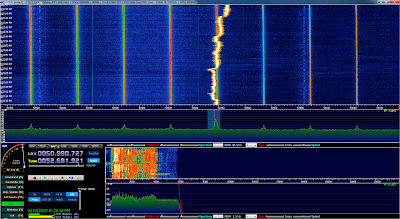 (The vertical bars are my LED monitor)

Apparently, this is an incredibly unstable oscillator that actually operates in the 6 meter ham band.

Because of the waterfall, it was trivial to figure out that this was FM. While the width appears to be around 24 kHz here, it can go up to 75 kHz when you blow the mic.

I'm really surprised that the other walkie-talkie can pick up the signal, considering how the transmitter jumps around not only each time you push talk, but even as you're transmitting.

As a ham (Extra class, by the way), I know I would HATE seeing something like this in the 6 meter band. But since the toys work despite their instability, I would expect any narrow FM in this range to "bleed" into the toy's passband, so kids should hear any hams they're interfering with.
Posted by Designing on a juicy cup at 8:44 PM