Yesterday was a full year since I discovered how to decode HTDV on the SDRplay. While I couldn't think of anything cool to publish yesterday, I did take my SDR setup with me today. I live out in the country where very little happens and wanted to see how much was going on in the city. My first test was on the 3rd floor of a building. I had trouble seeing any 3G towers (even my new 4G phone reports 1 bar at times around here), but I did see an unfamiliar walkie-talkie protocol called Cap+, which DSD+ can mostly decode. I barely made out some people talking about Highway 17 and LED traffic cones/markers. After I got VB Cable running and the audio levels good, I was able to hear conversations between employees of a pest control company. It was about 9:24 AM when I got it working well, and I heard a worker say he'd be late for his 9:15 appointment and ask the office to call the customer and let her know. However, I did not get any noticeably better reception from being 3 stories up. I couldn't even get more than a faint trace of NOAA radio.

Later I went to a library (only 2 stories but with more comfortable sitting areas) and was able to get what I strongly believe is a 3G signal along with something a little lower that may be GSM. 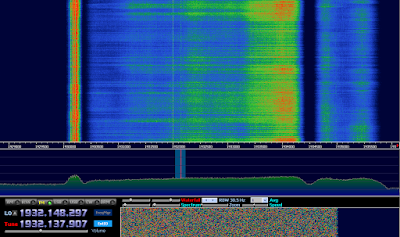 Measuring crudely, the wide one is 3.9 MHz which is close to the expected 3.84 MHz of a 3G signal. Wikipedia also reports that the downlink band in question spans 1930 to 1990 MHz, and it looks like these are skirting the bottom edge.

I'm still hard at work studying DSP in my spare time. I found a bug in the Python scripts I released. I shouldn't have used the radians() function. That t variable in sin(2*pi*f*t) was just time, not time as degrees.

While there's not much I can currently do on the cell phones project, I can still take IQ recordings and add them to the cellphones page. Taking my equipment in public today has allowed me to record some 2G GSM, which I don't really have where I live.

While I may never be able to get much from a cell phone downlink, I hope to at least see some indication that I'm close, even if it's just a PSK/QAM constellation. So far the chances are looking slim, but I'm not too discouraged because this is how the HDTV experiment began. At that time I had searched for months without success. It really looked like there was no possible solution to watching TV on the SDRplay, but I wouldn't accept defeat. Of course I am realistic and if the TV issue had been a hard limit in the SDR's chips then I would have quit. I only continued because I could see that it just needed a software solution.

Anyway, my efforts ended up paying off and I'm surprised at how popular my TV post continues to be. It shows that almost anything is possible with enough effort. I hope my cellphones/3G project will be just as rewarding.
Posted by Designing on a juicy cup at 3:14 PM