Ever want to record a signal but your SDR just didn't have a suitable bandwidth? That's an issue on the SDRplay. If you have a 2.5 MHz signal, for example, the least bandwidth you can use is 5 MHz. That's a lot to record when you just want one signal. And what if you need to use large bandwidth to offset the signal from the center so the DC spike doesn't mess it up? The DC spike can be a huge, almost insurmountable problem in the GHz bands. See the picture below.

Apparently if you record as a WAV and open with Audacity, you can multiply both tracks by a sine wave to shift an off-center signal to the center. However, I don't know how you'd do this for a signal on the left since Audacity doesn't accept negative values.

Here's how it's done, based in part on advice from Steve the Fiddle on the Audacity mailing list:

This is what it looked like when I used a 550 kHz tone. You can see that it's not perfectly centered because 550 kHz was not quite right, but it's very close.

Seeing the double signal, I initially thought I had created a lower sideband but upon closer examination I saw that it was not mirrored like AM should be, but rather duplicated, so this apparently works. You can see the faint carrier at both plus and minus 550 kHz along with the higher, non-mirrored duplicate of the signal.

I then low-pass filtered in Audacity (Effect->Low Pass Filter) to 900 kHz to get just the desired signal.

Now it's much easier to see how off-center it still is. Finally, here's a picture of this in SpectraVue: 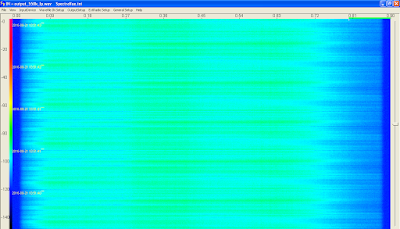 This has significant implications not just for analysis but for saving space on IQ recordings.
Posted by Designing on a juicy cup at 2:15 PM