I'm taking a break from Iridium to experiment with Inmarsat. Even though the signals are weaker and require special antennas, I prefer a weaker constant signal to the hopping blowtorch bursts of Iridium.

Recently I built another of Adam 9A4QAV's antennas, this time his tin-can helix. I was just able to discern those relatively wide signals (~168 kHz) shown on killmore231's Imgur page. During a chat I had on #hearsat, @trango informed me that those are BGAN, which is an Internet service.

The next day I found an even wider signal (pictured), which neither @trango nor I could identify. I mention it because it came in pretty strong and I'm willing to bet I could've decoded it, if I had access to a decoder. My tin-can antenna is pretty directional (but not as much as the 10-turn helix), and this signal came in best when I was aimed southwest and pointed high. To my surprise, @trango was able to tell me it came from CONUS Inmarsat at 98W.

I'll provide a comparison of the helix antennas I've tried.

Dimensions may be found in the video's comments. 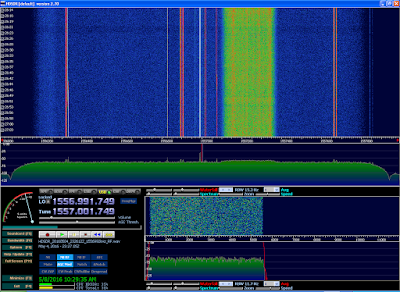 This is what @trango told me was from CONUS Inmarsat 98W.

I don't know why the signal is now wider. 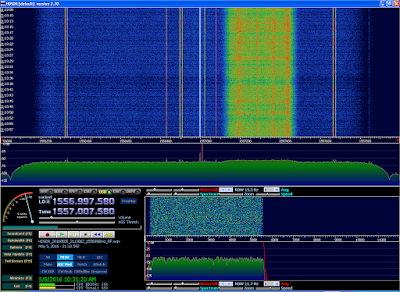 This antenna was incredibly directional, maybe to within less than a degree. It took me very long to find the satellite, and when I did the antenna was aimed north (go figure). It was a windy day (this was minutes before a big thunderstorm struck) and the wind wiggling the helix caused it to fade in and out. 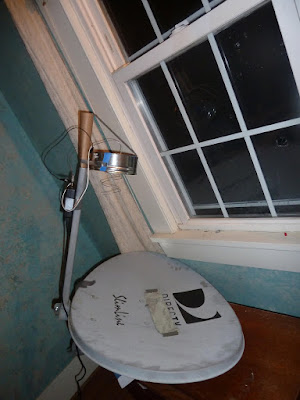 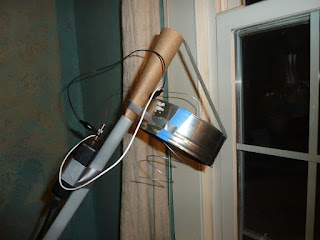 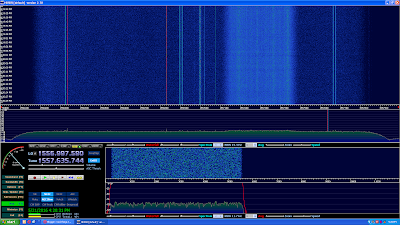 People on #hearsat told me that a dish setup was the very best, but after this kind of performance I was in doubt. However, all I had to do was take the setup outdoors (see #3.1) and it outperformed the 10-turn helix.

I have been able to get a better indoor signal (see below), but the signal strength pictured above is pretty typical right now. On #hearsat I found that these are some kind of aircraft signal, I think 3372 kilobit QPSK, but so far JAERO won't do anything with them. 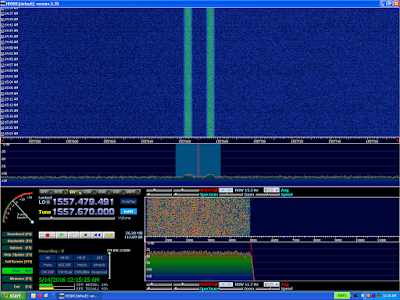 I like that I was able to at least see a signal indoors, but it really works much better outside. 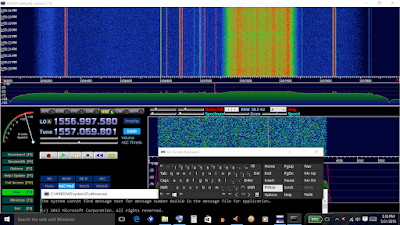 Notice how most of the signals are bright red. I suspect the poor indoor performance is partly due to the tree outside my window, and of course the glass and metal of the window.

I found that the perfect focal distance for L-band is in fact right where the original Ku/Ka LNB was, so you'll notice in the dish photos that that's where the helix is mounted.


No matter what, this wide signal seems to come in much stronger than the numerous ~168 kHz ones on killmore231's Imgur page. If I just knew what the really wide signal was, I'd decode it in GNUradio and publish the [non-personal] details.

I heard on #hearsat that using AM to demodulate QPSK will tell you the bitrate because there will be a spike in the audio waterfall. The frequency of the spike is your bitrate.

Be very careful when working with steel cans. I managed not to cut myself when I was using tin shears to cut my antennas, but I made the mistake of putting the sharp scrap in the house trash. Days later a piece poked through the bag and got me while I was taking the trash out.

I also decided to wear eye protection since I was stripping steel wire that kept wanting to spring back. You never know what it might stab into...
Posted by Designing on a juicy cup at 5:10 PM 2 comments:

Recently they released GNUradio for Windows. It sounded too good to be true, but apparently it's for real. It needs Windows 7 and up, and is x64-only. I downloaded it and tried it out this morning and was able to decode ATSC with it. 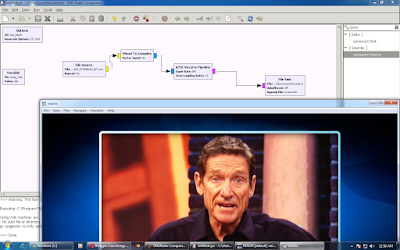 My favorite part of using Windows, apart from not having to wait for Linux to boot, is that you can record to a RAM drive and then select that file in GNUradio without having to copy it to the hard drive (of course, you should stop the recorder first!) The only catch is that you must use double slashes on your output TS filename in GNUradio, or the flowgraph will fail under Windows.

Once they finish CUDA support for VOLK, we can use live IQ from the SDRplay and watch TV as it's decoded.

Links:
http://www.gcndevelopment.com/gnuradio/index.htm
You might want to see the Documentation, since it tells you little helpful things like clicking the GNUradio shortcut in the start menu; double-clicking .py files will not work.
Posted by Designing on a juicy cup at 12:09 PM No comments: