I'm open to making changes if anyone encounters an issue. Let me know in the comments if something doesn't work.

Recently I became interested in building old versions of Chromium for Windows XP. There is a project called Advanced Chrome that does that already but I wanted to work on my own XP-compatible fork. Using archive.org's Wayback Machine, I was able to find Chromium build instructions from 2015, before they dropped XP support. Here are the steps to follow if you want to build an old version of Chromium.


TortoiseGit is optional but recommended. It will need a separate Git installation.
It wouldn't hurt to install Python 2.7 even though a copy of Python will be downloaded by depot_tools.
You should probably find a copy of Visual Studio and start downloading it now.

1. Visit this URL in the Wayback Machine

Even though I'm going to explain everything, you should read these instructions just to get familiar with how the build process works.

You can deselect the default options if you want, but you must make sure to install "Microsoft Foundation Classes for C++".

Also install the 2 Windows 10 SDK's listed earlier. You can skip the Windows 8 SDK for now but if you encounter errors you might try installing it.

Always install Visual Studio and the Windows SDK's to the default folders! Preferably the C drive!
If you don't, you may not be able to compile Chromium and could end up making a mess that would require you to restore your computer from a backup.

"depot_tools" is a set of Google utilities that download the Chromium repository and install some of the build tools. You cannot use the latest version because a lot has changed since 2015. Fortunately, the Wayback Machine cached a copy from 2015, but you can't just download and use it because it tries to download the tools from URL's that no longer exist. The downloads are still available at different URL's so I was able to fix it and I committed the changes to a private repo (linked below).

You need to download my custom 2015 depot_tools. Extract it to C:\workspace, and add C:\workspace\depot_tools\ to your PATH environment variable.

You don't need the PGP signature unless you want to verify that the custom depot_tools came from me.

After extracting the 7-zip file and adding the new folder to PATH, you'll need to set up your Git configuration as shown under "Bootstrapping Configuration" in this link.

"-Dcomponent=shared_library" is something to do with debugging. It compiles faster but you cannot copy or move your finished build.

"-Dtarget_arch=x64" Use this if you plan to build for 64-bit. You cannot build 32-bit if this is set, nor can you build 64-bit without it. Thanks to users "torne" and "thakis_" on the #chromium IRC channel for pointing this out. More info: https://bugs.chromium.org/p/chromium/issues/detail?id=178207

You now have the complete Chromium source from May 12, 2015 but there are a couple of minor mistakes that will keep it from compiling. One of the errors was addressed in this forum post and I'm including fixes here so you don't have to read it. Here are the 3 changes you need to make:
Save the files if you haven't already.

Make sure your command prompt is still in the src folder and run "ninja -C out/Release chrome". This process will probably take many hours. The good news is that when you compile again after making changes, it will be much faster because it only re-compiles changes.

If this step fails, it may be because the linker ran out of memory while compiling the last few DLL's.

If you've compiled before, re-compiling should look like this: 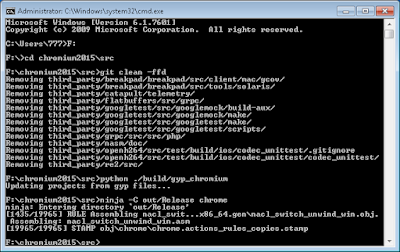 As you can see, memory usage ramps up during the final link step. 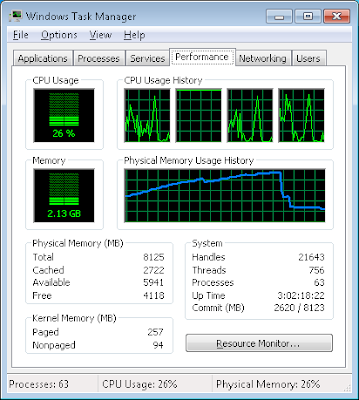 Here is what this version will look like when it runs for the first time. 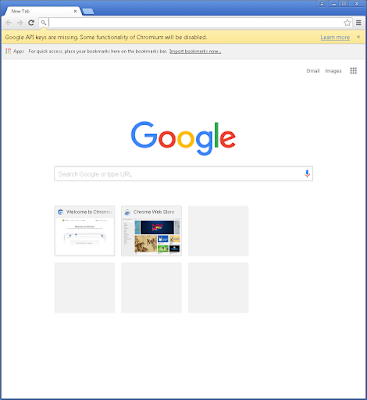 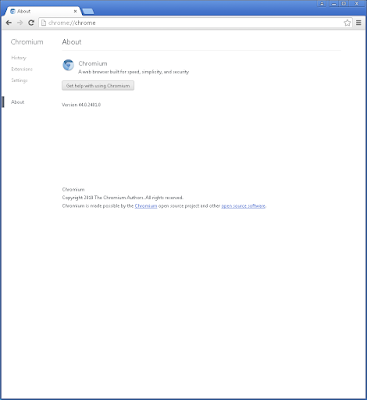