In 2011 my family got a Garmin GPS and a few years later I found it fascinating when I heard that it could get traffic data from FM radio. It occurred to me more recently that map updates could be sent over a broadcast with more capacity, such as a TV channel.

As you may know, my UTSC standard supports file transfers. Each packet is only 125,000 bytes, so you can't transfer much in each one, but it's possible to send large files as a split archive.

I set up an experiment to see how quickly I could transfer a full GPS map of South Carolina. Since I'm near the Georgia border I originally included a Georgia map but later decided to just do one state to make it faster.

I downloaded a copy of the OpenStreetMap data for South Carolina. I signed the map with my PGP key because I figured that automatic map updates should be signed and that unsigned ones, or those without a trusted signature, should require user intervention. I added a license file to the folder and then used my UTSC packet muxer to create packets that include a NoCopyrightSounds music compilation, an image that says this is a GPS map update and gives attribution for the map and music, and file transfers consisting of a split 7-Zip archive.

These are the 3 files I transmitted.

My packet muxer reads a JSON file with a list of content and an optional datacasting field. If datacasting is enabled, it finds the content with the highest bitrate and uses 7-Zip to compress the contents of a folder specified in the JSON. It instructs 7-Zip to split the archive into parts just small enough to fit in the least space (packets with the highest content bitrate).

The total content length was 23h23m00s and the file transfer was 104.9 MiB. The packet muxer reported that it had included the files 60 times. By coincidence, each full transfer took 1403 seconds or 23m23s. That means the map can be transmitted 61 times every 24 hours or about once every 23½ minutes.

After the muxer finished, I used my open-source UTSC transmitter (GitHub link) to transmit the output file. I used UTSC channel 2 (center freq 903.265625 MHz). Here's what it looks like in HDSDR. 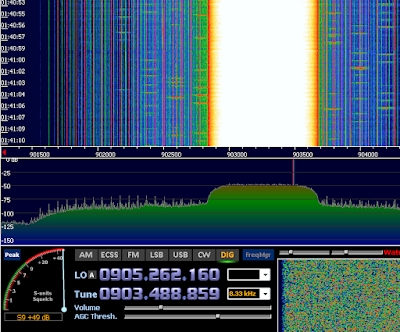 Unfortunately, I don't know how to demodulate QPSK at the moment so I can't test the signal but I did some verification of the muxer output with a hex editor before I used it.
Posted by Designing on a juicy cup at 6:20 PM No comments: