The shortwave bands are opening up again after months of discouraging reception. Since the spring of this year, the sun's radiation blocked, rather than helped, the radio waves.
It was frustrating for me because I only found out about it when I couldn't make any contacts on 20 meters. I had never been able to transmit SSTV on 14.230 MHz without getting a response! I realized that I could barely hear anything but static on that frequency, and I checked the propagation report. A very good one can be found here. Sure enough, all the bands were labeled, "Poor." I had never seen this happen before.

Several weeks later, I bought an SDRPlay. Then I set up a hanging dipole from a top-floor window. After more mediocre reception, I began to doubt the quality of my antenna and even my radio. I gave up monitoring the bands until things got better.

Things got better just under a week ago. Now the bands are open and this morning at 8 AM I got up, strung up an antenna, and turned on my radio. Australia comes in very well in the mornings. It's no surprise, considering that when the sun is rising on the east coast, the Pacific is dark. What was surprising was that the 15 meter (21 MHz) band was full. I heard what sounded like an Indian voice saying something about Germany.

I made an SSTV contact on 20 meters today. He got my callsign, but I couldn't read his. This weekend was the CQWW DX SSB contest, so the bands were full. Every 3 khz I could hear someone talking! Thankfully, 14.230 MHz was clear enough for me to get my picture out.

I first received a picture of a street sign that said, "Delaware." This was sent (probably to me) twice. Another picture looked like it contained my callsign and said, "Darn Contesters." Then I got a picture of Yoda labeled, "May the force be with you." By now I could just make out my callsign at the top. These pictures had horizontal bands of snow whenever contesters talked over the transmission.

I also heard what sounded like DRM on 14.233 MHz. The ham radio version of DRM is used for sending pictures.
Posted by Designing on a juicy cup at 10:14 PM No comments:

This is a quick tip I learned yesterday. I upgraded to Windows 10 from XP recently because I needed to be able to run Visual Studio 2015. Thankfully, I managed to do it before October 1st.

I noticed that the mouse doesn't respond to clicks right after I've typed. I would be typing in a Word document, click to place the cursor inside another paragraph, and then start typing again, only to find that the cursor had remained in the first paragraph!!! This naturally drove me crazy. I noticed the same problem when typing into Calculator (which, in Windows 10, is a Universal App.) Calculator wouldn't respond to clicks immediately after entering numbers.

I normally use LibreOffice and Office Online (both free) because Microsoft Office is expensive. I thought, "Ok, maybe LibreOffice isn't well written." But Calculator behaved the same way. Likewise, I thought, "Well, it is a Universal App, so it has to be written in some sort of universal language and run on an emulator in order to be ported between x86 (PC and tablet) and ARM (phone). Maybe the emulator is slow." One thing was sure: this certainly wasn't a problem on Windows XP!

But yesterday I found out that the problem stems from a new feature in Mouse settings (in the weird new settings window that replaces Control Panel.)

Here is a picture (you may want to click to enlarge it): 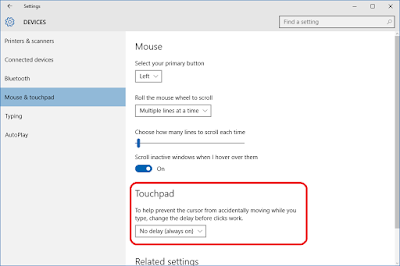 As you can see, I have already set it to "No delay (always on)." It had been set to "Medium delay."

Now that this is resolved, all programs, including Calculator and LibreOffice, are quite snappy. I now am a fan of the new Universal App system, but I still don't recommend upgrading to Windows 10 until more of the bugs and privacy issues are fixed.
Posted by Designing on a juicy cup at 9:16 PM No comments:

This morning I was using my SDRPlay and heard some AM data packets near 130 MHz. I knew this was the aircraft band and so they must be ACARS packets.

Transmissions in the aircraft band are in AM, as opposed to most other VHF services which use FM. Because they use VHF, you need line of sight to hear airplanes, but that doesn't mean they have to be passing overhead; on the contrary, planes usually fly so high that people in other states have line of sight.

I knew there were programs that could decode ACARS packets, but didn't expect it to work very well. Thankfully, I was wrong.

I upgraded to Windows 10 and thought I'd mention that I was skeptical when I saw how old this program looks. A lot of old decoding programs were for Windows 95/98 and expect different sound API's than what Windows Vista and up are willing to provide. Fortunately, acarsd runs just fine on Windows 10. 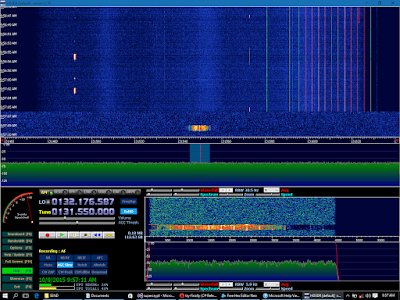 Download acarsd (the program above) and extract the ZIP. There will be a file called installer.exe. It's not a normal installer as it just extracts some files to a folder you choose. When it is done, open that folder and choose acarsd.exe.

If you sound card doesn't have Stereo Mix, make sure you have the latest official drivers from your manufacturer (not built-in Windows drivers) or use VBcable (which is free.) 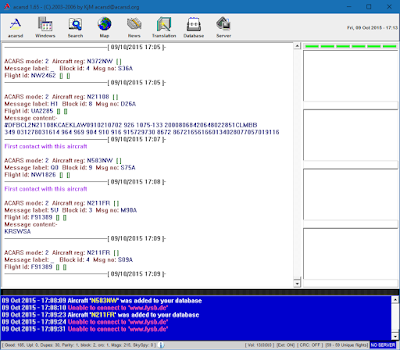 You can type the aircraft registration number in a search engine to find current flight plan. Sometimes there will even be GPS coordinates and "CREW ACKNOWLEDGEMENT" messages.

The picture below shows that you really can receive packets even if the plane doesn't pass over your state. (I'm in South Carolina) 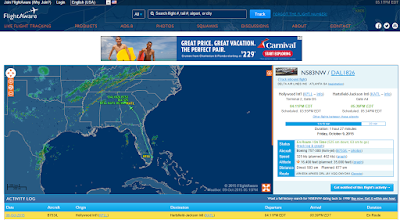 Posted by Designing on a juicy cup at 5:54 PM No comments:

Hi again. While making ATSC recordings, I ran into a problem that I think you should be aware of. Even with 100% perfect reception, your final decodes may be corrupt.

The moral of this post: Use RAM drives to record your IQ samples! SSD's might also be a good idea.

How I found out:
As I described in the first post, it takes a lot of bandwidth to record the IQ samples necessary to capture a TV station. Surprisingly, it takes 32 MiB/sec for 8 MHz of bandwidth, even though you're doing 16-bit samples. It seems that it should be 8 Megasamples/sec * 2 bytes/sample = 16 Megabytes/second.

If you use a magnetic hard drive to record IQ samples and some of your TV recordings are corrupt and won't play, chances are good it's the hard drive not keeping up.

On a side note: you may have also noticed that 8 MHz looks cleaner in the waterfall than 7 MHz, although 7 MHz can work. 6 MHz is just too narrow, because of the IF filters that round off the edges.

Using RAM drives, I had been limited to ~1500-1800 MB available RAM on one computer, which was only enough for about a minute. The only way to get more space was to use a hard drive. But hard drive recordings never played very well. I began to wonder if the recordings somehow got bad after a certain amount of time.

I tested this by taking several very large IQ recordings (of different stations.) Some were recorded to an 8 TB external drive I purchased recently, others to a very fast internal magnetic SATA drive, and one more on a 5 or 6 GB RAM drive (on different computer.)

Of the three, the only one I could actually watch was the one recorded to the RAM drive.

This is proof enough that filesize won't mess up the decoder; apparently the hard drives were causing samples to be dropped.
Posted by Designing on a juicy cup at 8:27 PM 2 comments:

There's a really cool program I recommend using with the SDRPlay called SDRConsole. It supports a feature called Multi-VFO.

I had heard of Multi-VFO but thought it was a hardware feature only present in the most expensive SDR's. But with SDRConsole, you can actually tune in multiple stations at once in software! This is useful for listening to walkie-talkies that transmit and receive on different frequencies, or even hearing multiple police walkie-talkies at once.

The only downside (for me) is that SDRConsole doesn't use the standard EXTIO interface, but rather the Mirics API. This means you don't get all the nifty SDRPlay options like RF Gain vs Use AGC, or most importantly, the DC cancellation options.
Posted by Designing on a juicy cup at 7:37 PM No comments:

Two weeks ago I was monitoring the 2m band with my SDRPlay and heard music on 146.000 MHz. It was odd because music is illegal on ham radio.

Here is a recording:

The music and Morse code must be this repeater's ID because they were repeated at regular intervals.
Posted by Designing on a juicy cup at 7:17 PM No comments: